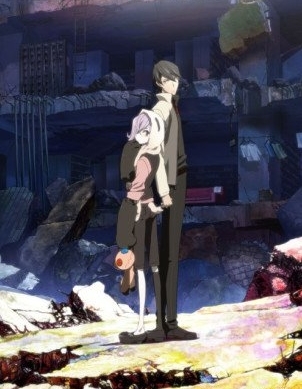 An anime by Studio BONES, airing as part of the Fall 2011 lineup. Un-Go tells the story of two people, Shinjuro Yuki and Inga, working together to solve mysteries in the near future. The story is based on the works of Ango Sakaguchi (Aoi Bungaku Series' "In the Forest, Under Cherries in Full Bloom"), a post-World War II Japanese novel and essayist. It is directed by Seiji Mizushima, with character designs by pako (sic) and Yun Kouga, featuring a script by Sho Aikawa.

Rinroku Kaishou, head of the Kaishou media empire, uses information gleaned from his vast network of technology and contacts to solve crimes all across Japan, making himself a hero in the eyes of the Japanese people. On the surface, an old-fashioned detective named Shinjuro Yuki and his odd assistant Inga always show up at the wrong time and reach the wrong conclusion, earning Yuuki the nickname of "The Defeated Detective" and usually public mockery.

However, the truth is a little more subtle: Yuuki and Inga are called in to solve cases that Rinroku finds too delicate to handle on his own. Upon learning about the truth of the case, Rinroku decides to spin them to comfort a nation still reeling from the shock of multiple terrorist attacks and a major war. Though Yuuki is mocked in public, in private he's "The Last Great Detective."

Has a Prequel named Episode 00: Inga-ron.

Un-Go is streaming in various languages on Crunchyroll