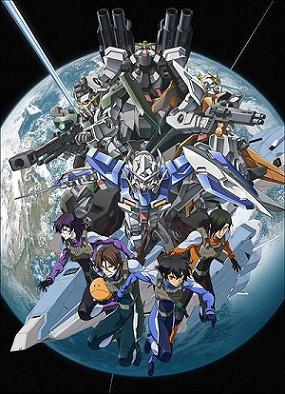 I am Gundam.
"Rebirth begins through destruction."
Advertisement:

Premiering on October 4th, 2007, Mobile Suit Gundam 00 note Pronounced "Double-Oh", the eleventh series in the franchise, was the first series in the long-running Gundam franchise to be set in the Gregorian calendar. The series is set roughly 300 years in the future — in AD 2307, and the world has divided into three international alliances:

Since fossil fuels have become too depleted to be sources of energy, these three superpowers have jointly constructed a massive solar array ring around the Earth, connected by three equally-gigantic equatorial Orbital Elevators (Union's in South America, HRL's in the Pacific Ocean, AEU's in Africa). Despite this cooperation and mutual reliance, they still engage each other in military actions and power plays, all part of a calculated zero sum game; war is still very much a reality.

Enter Celestial Being — a shadowy private military organization with the goal of eradicating war completely and permanently. Armed with four incredibly advanced, seemingly-unstoppable Humongous Mecha known as "Gundams," Celestial Being seeks to eliminate war... by attacking all other sides. The three global powers immediately mobilize to match the power of the Gundams, and before long it becomes increasingly clear that Celestial Being's goal of eradicating war will come at a heavy price: They must become the enemy of the entire world.

Gundam 00 is split into two seasons; with the first airing from October 2007 to March 2008, while the second from October 2008 to March 2009. The series also spawned several side-stories, detailed here, and a movie wrapping up the universe (called A Wakening of the Trailblazer) came out in September 2010. In 2018, a sequel anime to A Wakening of the Trailblazer was announced with Seiji Mizushima returning as director, currently slated for 2027, on Gundam 00's 20th anniversary.

Revealed Chronicle, a CGI anime taking place between Seasons One and Two, was also announced.

That... is Celestial Being.