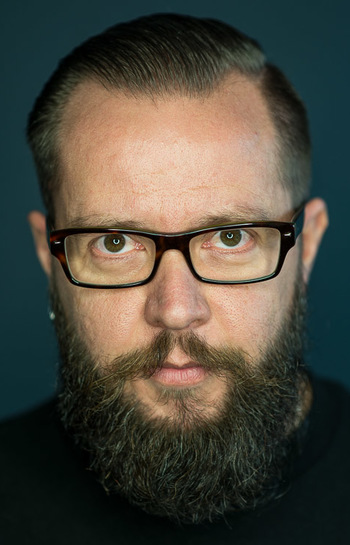 A popular voice actor for The Ocean Group born in St. Asaph, Wales, Richard Ian Cox (born October 3, 1973) is essentially the go-to voice actor you need whenever you need the Jerk with a Heart of Gold male half of Belligerent Sexual Tension.

While he's had a fairly varied career in voice acting, he will forever be inevitably linked to two roles: Ranma Saotome of Ranma ½, and Inuyasha of, well, Inuyasha. In both of these roles, he played the Jerk with a Heart of Gold... well, read the above paragraph. Interestingly enough, both of those works were actually Takahashi's works. Of further interest is the fact that both characters (in addition that both characters are from Rumiko Takahashi's works) were originally voiced in Japanese by Kappei Yamaguchi. This trend would continue, with Cox repeatedly being cast as the dub voice for Yamaguchi's characters.

He also gained prominence for playing Mickey Rooney's teenaged traveler and horse rider, Alec Ramsay, in The Family Channel's Adventures of the Black Stallion during the early '90s.

For your own safety, don't refer to him as "Dick Cox".