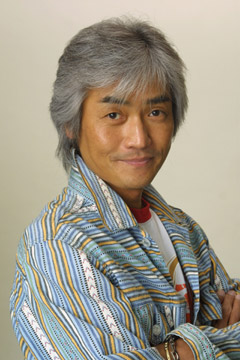 Kazuki Yao (born June 17, 1959) is a Japanese voice actor who loves to voice Jerkass roles in general. Finally got his breakout or so as the Idiot Hero Judau Ashta in Gundam ZZ, later the Hot-Blooded Shinobu Fujiwara of Dancougar, then voiced villains that are quite a bit incompetent. He's also a decent singer.

He was once married to fellow voice actress Mina Tominaga, but they have since divorced. His wife since 2011, Natsuki Hayashi, is an actress and dancer.