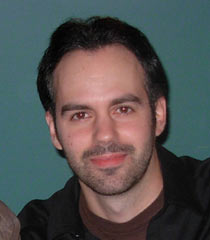 His eyes are red. He must know your name and lifespan now...
Advertisement:

Basically Bradley Swaile (born December 26, 1976 in Vancouver, British Columbia) is the Canadian equivalent to Mamoru Miyano, seeing as how this guy usually ends up dubbing Miyano's roles. He was at first pigeonholed into playing either young male leads or Idiot Heroes... note Note that he did have a strong following in Vancouver and parts of Canada.

...And then came Death Note.

In Death Note he finally broke out of his pigeonhole by playing Light Yagami. Many fans consider his performance to be the best of his entire career. Swaile instantly became memetically popular, joining fellow VA Scott McNeil. He introduced us to the wonders of taking potato chips... and EATING THEM, and terrified everyone with his epic maniacal laughter in the final episode.

You can also hear him in nearly EVERY Gundam series, usually as a Gundam pilot. He pretty much just uses the same voice as he did for Quatre each time as well, making him that much easier to find.

Exactly as planned... Not even my father planned this...