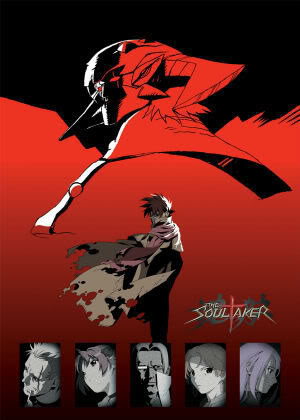 The SoulTaker was created by Tatsunoko Production in 2001, directed by Akiyuki Shinbo, who would later direct the first season of Magical Girl Lyrical Nanoha. It tells the story of a young boy named Kyōusuke Date who... dies in the very first scene of the anime. Killed by his dying mother who loved him very, very much. For essentially no reason.

... And then he gets dug out of a cemetery by a girl named Maya, and things get crazier from there as he has to confront the forces of the Mega-Corp Kirihara Group led by Corrupt Corporate Executive Yui Kirihara as well as the enigmatic mutants of "The Hospital". Backing him up at first is the equally mysteriously-motivated man named Shiro Mibu, and later on the young Hospital nurse Komugi Nakahara who often cosplays. Kyōsuke himself has the power to turn into a demonic creature that the Kirihara Group dubs The SoulTaker and resolves to find his sister while protecting the "Flickers", fragments of her soul given human bodies.

Like Nanoha, it starts out with a basic plot but kicks into high gear in the sixth episode, at which point the series starts bordering on Mind Screw territory at times which is why many consider it Devilman Meets Neon Genesis Evangelion. It's still a very good series nonetheless, with a unique aesthetic, a kickass opening which was the fourth song JAM Project made, and a stellar voice acting cast on both sides of the Pacific. Definitely worth a look.

The SoulTaker was later followed by Nurse Witch Komugi, which parodies this show.

Not related to the western film of the same name or to Soul Eater.

The SoulTaker provides examples of the following tropes: