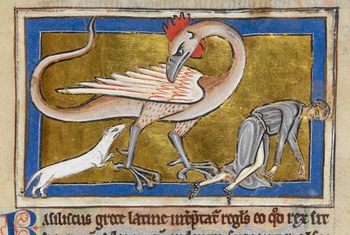 The Basilisk is a mythological creature which has shown up in many bestiaries and fantasy works. Described as being hatched from the egg of a snake (or a toad) by a cockerel, it is generally portrayed with a mix of reptilian/amphibian and bird features. This makes it similar in appearance to its cousin the Cockatrice, a dragon with birdlike features which is said to be hatched from a chicken egg (sometimes a rooster egg) by a snake.

Whether these are two distinct creatures or whether they’re interchangeable names for the same thing is something of a Cyclic Trope. Originally (i.e., in the Roman Empire and the early Middle Ages), the basilisk was depicted as a horribly venomous snake, while the cockatrice, which first shows up in medieval England, was a chicken-reptile chimera that turned people to stone with its gaze. Eventually, the two creatures blended into a single myth for a number of reasons, and became synonymous terms for a single monster. In more recent times, some (although not all) works of fiction (possibly inspired by Dungeons & Dragons) have come to once again set them apart. The basilisk tends to be shown as a more distinctly reptilian snakelike or lizardlike animal, and usually maintains a deadly petrifying gaze. By contrast, the cockatrice tends to be portrayed as more distinctly avian, with a largely birdlike body bearing a snake tail, bird legs, and wings capable of flight.

Basilisks are reputed as the king of serpents (the name comes from the Greek for "king", "basileos"), and some bestiaries depicted them with crowns, if not with crown-like features such as a cock's comb. They are often extremely venomous and can cause instant death or petrification to anyone who looks directly at them, which makes them a Brown Note Being. Weasels are its natural enemy, not unlike the mongoose and cobra, and the crowing of a rooster has a fatal Brown Note effect on it. It is also said that one can kill it by turning a mirror on it, as it is not immune to its own gaze.

Basilisks and cockatrices, regardless of what deadly powers they are given or whether they are treated as the same thing or different creatures, tend to be used fairly consistently as inherently, incredibly deadly beings whose mere gaze or presence is enough to kill, and can probably turn you to stone one way or another, thus posing an unusually dangerous threat that needs to somehow be dealt with without being approached or even looked at.

Another thing these two creatures have in common is being fundamentally incompatible with "proper" life or ecology. They are typically depicted as killing every creature they encounter, and if the basilisk's mythological suite of powers is included this extends to killing off vegetation and poisoning the soil and water. The born-from-a-rooster's-egg origin further defines them as mistakes of nature, creatures that should not exist and that only come into being when something happens that in a proper course of events wouldn't and shouldn't — such as a rooster laying an egg, or a snake or toad brooding a bird's young.

See also Snakes Are Sinister, Feathered Fiend and Giant Flyer. Compare Feathered Serpent, another bird-snake hybrid monster. Not to be confused with The Great Serpent.

Not to be confused with Basilisk, which is In Name Only. The real life lizard called the basilisk

was named for its resemblance to the mythical beast—with its comb-like crest and habit of running on two legs, it looks not unlike a medieval depiction of a cockatrice.