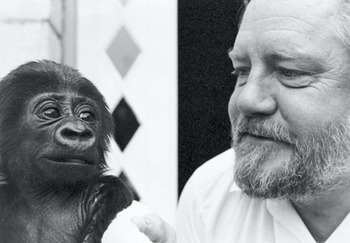 He's the one on the right.
"There is no first world and third world. There is only one world, for all of us to live and delight in."
Advertisement:

Durrell was the author of many books, mostly autobiographical works about his childhood in Corfu and his expeditions to various places in the world, as well as some humourous novels and children's books. His recurring themes are animals with loveable personalities, eccentric and unusual people, and the fragility of nature. He was also the presenter of a handful of radio and television programmes.

He was also the younger brother of Lawrence Durrell, who is best known as the author of the Alexandria Quartet. Lawrence appears as the loud and constantly complaining "Larry" in the Corfu stories.