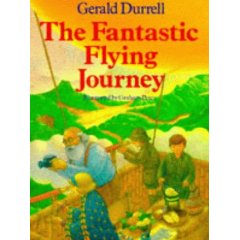 The Fantastic Flying Journey is a children's book by Gerald Durrell, illustrated by Graham Percy. It tells the story of the Dollybutt children, Emma, Conrad and Ivan, and their adventures around the world in their Great-Uncle Lancelot's balloon, the Belladonna, as they search for their missing Great-Uncle Perceval, who vanished two years before while studying gorillas in Africa. Along the way, the children and Lancelot talk to the various animals they meet with the aid of a mysterious grey powder, an invention of Perceval's which enables them to communicate with animals.

Two years after the original book, Durrell wrote a sequel, The Fantastic Dinosaur Adventure, in which Lancelot and the children travel back to the time of the dinosaurs in pursuit of the evil Sir Jasper Collywobble.

In 2001, an animated children's series was produced in the UK, based on the book. It expanded the plot, and added a villain who pursued the Dollybutt family on their journey to get her hands on the magical powder that enables them to talk with animals.