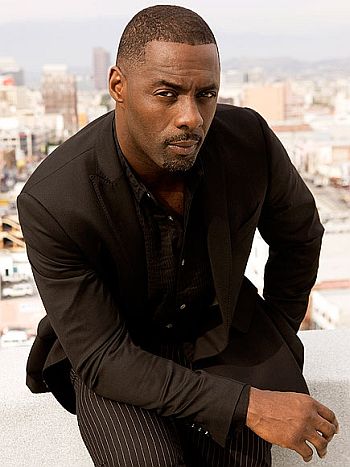 He's aware of the effect he has on women.
"To avoid crucifixion by The Wire fans, we're obliged to point out that this guy played Stringer Bell."
— Kevin Murphy on Heimdall in the RiffTrax commentary of Thor
Advertisement:

A Golden Globe award winner for his role as Luther, he is also famous for having starred as the sophisticated druglord Stringer Bell in The Wire and in several big budget Hollywood films such as Thor, Prometheus, and Pacific Rim. He also reprised his role as Heimdall in the Thor sequels Thor: The Dark World and Thor: Ragnarok, and also had appearances in Avengers: Age of Ultron and Avengers: Infinity War.

Elba is becoming Disney's go-to guy when they need an intimidating voice. In 2016 alone, they released three animated movies featuring Elba—besides voicing the villain Shere Khan in The Jungle Book (2016), he also voiced Police Chief Bogo in Zootopia and a bullying sea lion in Pixar's Finding Dory. Plus, the MCU is managed by Disney.

He's also a musician, known as DJ Big Driis/Big Driis the Londoner, as well as kickboxer, starting out quite late in life (at age 44) but still good enough that he won his first (and as of yet only) fight, via KO.

Example of:
You Wouldn't Shoot Me