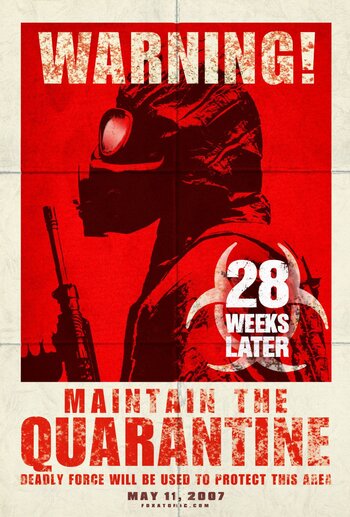 "We are headed for the green-zone, our area of security and reconstruction, designated as District One. District One is located on the Isle of Dogs. Although the Isle of Dogs is completely safe, the surrounding area of London is not....."
— DLR Soldier
Advertisement:

As implied by the title, the story begins twenty-eight weeks after the events of the first film, where a literal hate plague ravaged Britain: a U.S.-led NATO force has established a foothold in the Isle of Dogs, where it's started the process of repatriating the countless British citizens left stranded after leaving their country during the Rage virus outbreak. Those who return end up quarantined in "District One" under heavy surveillance by US soldiers; Don Harris (played by Robert Carlyle), one of the quarantined, became one of the few people trapped in London who managed to survive the outbreak. Haunted by the memory of being forced to abandon his wife during an attack by a horde of infected Rage carriers, Don ends up reunited with his two children, Tammy and Andy, when they become new residents of District One.

Since the Infected starved to death weeks ago and no evidence suggests the plague crossed over into other species, the survivors begin the process of trying to rebuild their former lives while the NATO forces begin an extensive effort to clean up further areas of London to prepare for rehabitation. When Tammy and Andy sneak out of District 1 in order to visit their former home, however, the survivors — and the soldiers protecting them — soon discover lingering traces of the Rage virus, which kicks off a frantic fight to keep the plague from spreading once more.

Another sequel, called — what else? — 28 Months Later, was planned by the creators but has been lingering in Development Hell ever since the release of Weeks.