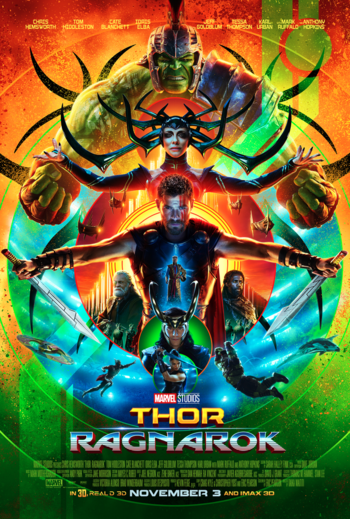 Valhalla, I am coming.
"It's a long story, but basically I'm a bit of a hero. See, I spent some time on Earth, fought some robots, saved the planet a couple times. Then I went searching through the cosmos for some magic, colorful Infinity Stones. Didn't find any. That's when I came across a path of death and destruction which led me all the way here ... where I met you."
— Thor
Advertisement:

Thor: Ragnarok is the 2017 sequel to Thor and Thor: The Dark World, and the 17th overall film in the Marvel Cinematic Universe as well as the fifth entry of Phase 3. It is directed by Taika Waititi (What We Do in the Shadows, Hunt for the Wilderpeople) with a score by Mark Mothersbaugh.

After the return of Hela, a ruthless, ancient being who had been imprisoned millennia ago, Thor Odinson finds himself and his not actually dead brother Loki marooned halfway across the universe on Sakaar, a Landfill Beyond the Stars—and without the source of many of his powers, his mighty hammer, Mjölnir. On the bright side, after being forced into the Gladiator Games of the planet's eccentric ruler, the Grandmaster, Thor discovers the games' greatest champion is... the Hulk, of all Avengers!

Now Thor, along with Hulk, fellow gladiators Korg and Miek, and a fallen Asgardian Valkyrie—and Loki—must escape the Grandmaster’s clutches and find a way back home, before Hela brings an end to Asgardian civilization once and for all.

The film directly leads into the opening of Avengers: Infinity War, and has a later 2022 sequel picking up on a number of unresolved plot threads from Ragnarok, Thor: Love and Thunder.

open/close all folders
Tropes A to F
Tropes G to O
Advertisement:
Tropes P to Z
"I wouldn't worry, brother. I feel like everything is gonna work out fine."
Feedback