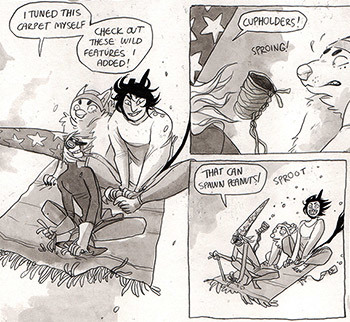 "[The] very latest in intercepts and countermeasures. Titanium armour, a multi-tasking heads-up display and six beverage cup holders. All in all, rather stocked."
— R, The World Is Not Enough
Advertisement:

What can you install into your Cool Car to make it even more awesome? You decide to pimp it out with a loud stereo, wings, lasers and cannons, a giant robot body, and cup holders.

For some reason, when a character gets a new car, he will usually show a friend all the cool features the car has. When those features include cup holders, you can expect the friend to become more excited about those than any other feature the car has. Surprisingly few works ever ask the question of why you would allow open containers of liquid anywhere near the interior of a car the character just spent most of their annual salary on in the first place.

This could be headed for Dead Horse Trope territory: cup holders have been standard equipment on most cars since at least the late 90s. Closely related in terms of sarcasm are floor mats.