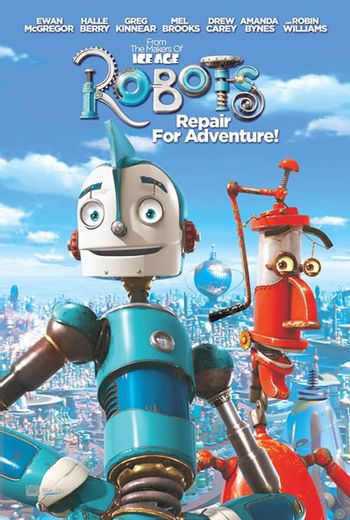 The greatest animated comedy ever assembled!

Looking for the trope? See Robot.

"You can shine no matter what you're made of!"

Robots is a 2005 CGI-animated film produced by Blue Sky Studios, directed by Chris Wedge and co-produced by William Joyce. It's written by David Lindsay-Abaire, Lowell Ganz and Babaloo Mandel.

After an accident in a local restaurant results in Herb Copperbottom (Stanley Tucci) going into debt, his ambitious young son Rodney (voiced by Ewan McGregor) leaves his hometown for Robot City, hoping to show his inventions to his childhood hero, Bigweld (Mel Brooks). To his dismay, Bigweld has been displaced by Corrupt Corporate Executive Ratchet (Greg Kinnear) who is interested only in selling shiny upgrade parts to robots, leaving anybody who can't afford them to rust.

Rodney finds himself alone and broke in the big city. Luckily (or unluckily) for him, he becomes friends with motormouth and kleptomaniac Fender Pinwheeler (Robin Williams), who introduces him to his little sister Piper (Amanda Bynes) and his misfit collection of friends: Lug (Harland Williams), Crank Casey (Drew Carey), and Diesel (who needs a new voice chip and is The Unintelligible for most of the movie.).

Ratchet's factory stops producing spare parts, forcing robots to upgrade worn-out components. For bots like Fender and his friends who can't afford the upgrades, this means being recycled in the chop shop - a nightmare world beneath the city which just happens to be overseen by Ratchet's domineering mother, Madame Gasket (Jim Broadbent).

Rodney, as The Hero, isn't just going to sit back and let this happen. With the help of Cappy (Halle Berry), an employee of Ratchet's who is disgusted by the way things are going, he sets out to reinstate Bigweld and defeat Gasket & Ratchet.

The film was released on March 11, 2005, and received mostly positive reviews. It grossed $260.7 million in the box office.

Example of:
Not Helping Your Case

Singin' in the Oil

Singin' in the Oil