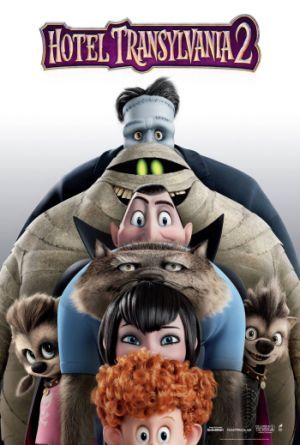 They're back to raise a little terror.

The sequel to the 2012 animated comedy, Hotel Transylvania.

Mavis and Jonathan are happily married and have a son, Dennis, who isn't showing any vampire traits. Mavis thinks the castle isn't safe for Dennis, so she visits Jonathan's home in California to see if that's a good place to relocate. Meanwhile, fearing he'll lose his daughter and grandson, Dracula tries to push Dennis to show signs of being a vampire so Mavis will change her mind, constantly rejecting advice to turn to his own father Vlad (voiced by Mel Brooks), a classic count from the old guard who coached Dracula in the ways of the vampire through force. For Dennis' 5th birthday, Mavis likewise invites Vlad without telling Dracula, who also brings a truly threatening plus-one.

The movie was released on September 25, 2015. Here's the teaser trailer

The official trailer can be seen here

The film was followed by an animated short titled Puppy!, and a second sequel, Hotel Transylvania 3: Summer Vacation, which was released in 2018.

Hotel Transylvania 2 has the following tropes

However, parents complained about the implications, so the joke was removed from all future releases. The line now goes:
Kakie: Slow down, Wuzzlelumplebum! [chuckles]
However the line remains unchanged when shown on British television, as well as on FX airings in the United States.

Dennis says his first word...which Drac does not enjoy that much.

Dennis says his first word...which Drac does not enjoy that much.