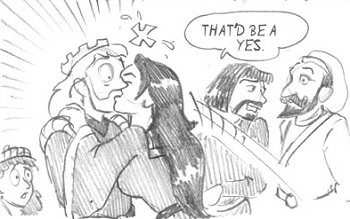 Maj. Gen. George Hammond: Colonel, you've had the most experience in fighting this hostile. Assuming you have to defend yourself in the field, are you up to it?
Col. Jack O'Neill: We beat 'em once.
Hammond: I'll take that as a "maybe".
— Stargate SG-1, "Children of the Gods"
Advertisement:

A three-part, generally comedic dialogue trope that goes as follows:

The trope is very flexible, as long as the three parts are there.note In fact, even step 3 alone implies this trope is at least being thought of, even if it wasn't begun normally, because saying things about an answer to a question implies there has been a question and an answer. Step 2 could be verbal or nonverbal. It could be an Implied Answer, a Non-Answer or something completely unrelated; it could be an indecisive answer or a very decisive one (just not usually, for obvious reasons, a simple "yes" or "no"); it could be ambiguously an answer, a perfectly clear answer, perfectly clearly not an answer to the question at all, an apparent bizarre Non Sequitur, and so forth. As such, step 3 could be a perfectly reasonable response, Comically Missing the Point, stating the obvious, sarcasm, wishful thinking, etc.