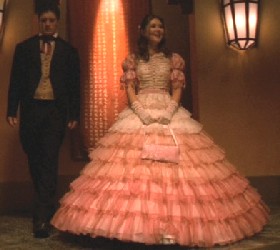 Who cares if she got it from a store?
Advertisement:

In a dive bar, Inara looks on as Mal and Jayne play a friendly game of holo-pool with a pair of men from another ship, which quickly becomes less friendly when Mal learns they are slavers and retaliates by picking their pockets—setting off a brawl. Cue theme.

Serenity arrives at Persephone. Inara chooses from among a number of offers for her Companion services, eventually settling on repeat customer Atherton Wing, who wants her to escort him to a formal ball. While she prepares, Mal and the others go out shopping, but are accosted by the smuggler Badger (who worked with the crew previously, during the pilot). Badger knows of a client, a rich man named Warrick Harrow, who has cargo that needs to be moved offworld but refuses to associate with Badger. Badger's plan is to have Mal drop in on a dance Harrow will be attending— the same one Inara and Atherton are at.

Mal, along with Kaylee, arrive at the ball, and Mal is able to reach Sir Warrick Harrow, though he is unable to work out a deal. Inara wanders over and they exchange some small talk, until Atherton comes to pull her away, claiming that since "money changed hands," Inara is his for the night. Mal immediately decks him over the perceived insult; unfortunately for him, under the rules of society on Persephone, this means he must face Atherton, a master duelist, in a sword fight.

Mal is put up for the night in a hotel suite, where he familiarizes himself with the sword he will use against Atherton. Inara sneaks in to help him, but the two end up arguing, as usual. Meanwhile, on Serenity, Badger and his thugs arrive to ensure the crew doesn't interfere with the coming fight, figuring that such interference would ruin the deal with Harrow. The crew devises a plan to escape, provided they can distract Badger. River promptly arrives and Breaking Lectures Badger in his own accent (giving a hint of her psychic abilities), but the crew is also distracted and misses the opportunity.

In the morning, Mal and Atherton, accompanied by Inara and Harrow, face off at the dueling grounds. They fight, appearing to be evenly matched, until Atherton reveals he is merely toying with Mal, and easily injures and then disarms the captain. Inara pleads with Atherton to spare Mal, saying she will stay with Atherton if he does. Mal uses the distraction to disarm Atherton and punches him, then recovers Atherton's sword. Mal spares Atherton and leaves with Inara and Harrow. Atherton claims he will use his influence to ruin Inara's reputation, but Inara counters by placing a Black Mark on him in the client registry, which has the effect of putting him on the Companion blacklist; meanwhile Harrow, impressed by Mal's commitment, offers him the cargo job. Mal and Inara arrive back at Serenity and Badger promptly leaves, with the crew claiming they were "just about to spring into action."

The episode closes with Mal and Inara discussing the day's events in the cargo hold, zooming out to reveal Harrow's cargo of... cattle.