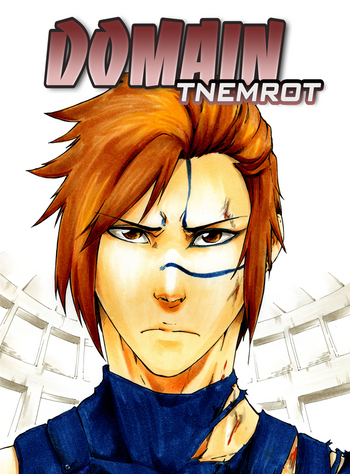 An OEL Manga webcomic created by David Herbert and Tatiana Lepikhina, Domain Tnemrot, or just Tnemrot, is the story of a future (year not identified) where slaves are given special bands that allow them to become super powered, while losing all free movement to their masters, who control them remotely, as in a video game. The gladiator-style battles are set in the titular stadium.

The story focuses on Dae, a former free man but now a slave, and his owner Mia, an 8-year-old girl who enters him in the gladiator games while not fully understanding the consequences of doing so. While preparing for the fight, Mia forgets to attach a special collar that would give her full control of Dae, allowing him free movement while in the ring. During his first fight, Dae's opponent, a girl named Angel, asks him to kill her, but Dae manages to free her without anyone realising what he has done. Angel becomes Mia's pet as well, but with a constant fear that her old master will find out she's still alive and come after her.

The comic features decompressed storytelling but is very action based, with artwork inspired by Bleach. It updates every Monday, Wednesday and Friday. You can read it here

. It's also available on Comixology.