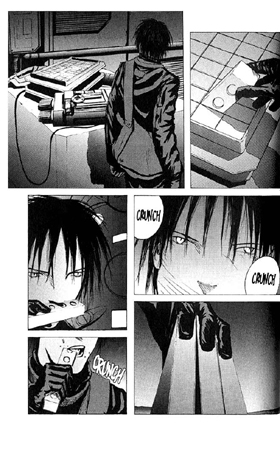 I'll take a piece of shortbread... AND EAT IT!
Scott: And then what happened?
Ramona: Uhhh... about 30 pages of explosions and tidal waves.
— Scott Pilgrim
Advertisement:

A trend that flourished in the late 90s and early 00s in the wake of Trope Codifier The Authority written by Warren Ellis and drawn by Bryan Hitch. Heavily inspired by long-form manga series, Decompressed Comics rely heavily on Splash Panels, Aspect Montages and minimal dialogue to maximize the visual effect of a story. The Authority aimed to mimic the widescreen action of a Hollywood movie by creating images that were as big and as striking as possible.

This trope is also used by people who want to add a slower, cinematic pace by, for example, using an entire page to show someone walking silently down a corridor in numerous panels, in order to create tension or otherwise express a mood. This also gives a clear direction whenever the comic is going to be adapted into either anime/cartoon or live-action.

When used well, decompression is a useful tool that can not only give artists a chance to stretch their wings but also alter the pace of the issue in order to tell the story more successfully. Of course, like any tool it can be used poorly. Some writers (including, arguably, Ellis himself in later years) used it to pad out thin plots or to blindly mimic then-fashionable trends. Such writers were often accused of Writing for the Trade. Ellis would respond to that by writing several comics that are decompressed, but still manage to wrap up every story in one issue, thus proving that you can write in this style without writing for the trade.