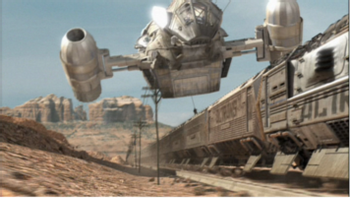 The slightly-infamous "more action" pilot demanded by Fox in lieu of "Serenity", "The Train Job" was the first episode aired.

Mal, Zoe, and Jayne find themselves between jobs in a dirtside bar on an unnamed "little moon" during a celebration of the Alliance victory in the Unification War. Mal, a veteran on the losing side, goes to pick a fight with one of the drunk Alliance supporters, which quickly escalates until Serenity has to rescue the crew from the entire bar. Mal travels through the ship, checking its flight-readiness, and establishing each of the characters set up in the missing pilot episode.

Mal and Zoe meet with a crime lord named Adelai Niska, a vicious and feared crime boss who is nonetheless willing and able to pay for good help. He outlines a plan to steal unspecified but valuable cargo from a train on an outlying world.

The two board the train without incident while Serenity moves into position for its role in the heist. Once onboard, however, they discover a squad of Alliance infantry is sharing the train with them. Zoe suggests calling off the mission, but Mal notes that the soldiers are nowhere near the cargo, and they press on, with the added incentive of humiliating the Alliance. They enter the cargo car and booby-trap the door before opening a hatch on the car's top. Serenity moves in overhead, pacing the train as Jayne is lowered on a cargo winch. As they work to attach the crates to his harness, an Alliance soldier enters the car and triggers a smoke trap. Jayne is injured in the ensuing firefight, but he and the cargo are winched safely back to Serenity, and Mal and Zoe make it back to their passenger compartment under cover of smoke.

The train is stopped at the next town, Paradiso, while the Alliance soldiers try to reason out the theft. Inara arrives with a cover story to free Mal and Zoe of suspicions, but not before they meet with the town sheriff, who mentioned that the stolen cargo was medical supplies, intended to alleviate a wasting disease plaguing the area.

Meanwhile, on Serenity, Jayne tries to pull rank and take the ship off-world, intending to collect payment and leave Mal and Zoe to their fates. The rest of the crew disagrees, and Jayne threatens to use force if he has to. Before he can make good on his threat, though, he collapses, and Simon reveals that he dosed Jayne with sedatives while patching his wound. Wash proposes a new plan, settling the ship down in a small valley while Inara goes to find Mal and Zoe.

When he returns to the ship, Mal announces his plan: he will return the medicine to Paradiso and refund Niska for the advance he paid on the mission. However, they are attacked by several of Niska's enforcers, including his lieutenant Crow. The enforcers are defeated in a gunfight, and Mal and Zoe set off to return the supplies. Before they reach Paradiso, the sheriff and a patrol run across them; the sheriff lets them go, however, when he realizes they intend to return the supplies anyway.

Back at Serenity, Mal instructs Crow to return to Niska with the money. Crow refuses and threatens to hunt down Mal, so Mal kicks him into Serenity's engine intake, and repeats the offer to a more receptive enforcer. The remaining enforcers leave, and Serenity is clear to take off.

Closing the episode is a scene on an Alliance warship, where two mysterious Men in Black wearing blue gloves ask the captain about River's whereabouts.

Mal and his crew attempt to convince Crow to take back the money for their hit, but he refuses and swears to hunt them down and kill them. Rather than letting him live and risk creating a new foe, Mal simply kicks him into the turbine where he meets a grisly death. Needless to say, the next book is much more agreeable.

Mal and his crew attempt to convince Crow to take back the money for their hit, but he refuses and swears to hunt them down and kill them. Rather than letting him live and risk creating a new foe, Mal simply kicks him into the turbine where he meets a grisly death. Needless to say, the next book is much more agreeable.