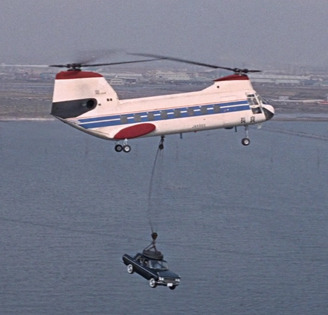 A visually spectacular (if impractical) way of stealing something, this technique involves flying over the target and then using a hook or a magnet to snag it and carry it off into the sky. Most commonly the aircraft used is a helicopter due to its maneuverability, but it can be done with a suitably slow moving plane, or even a Cool Airship.

Often overlaps with Steal the Surroundings. Compare High-Speed Hijack when somebody steals the vehicle itself without stopping it.

Aliens Steal Cattle is a specific Sub-Trope where aliens uses spaceships to steal livestock. The perpetrators are likely to be Sky Pirates.

Note: This trope is not about hijacking aircraft. It is about using an aircraft to steal something and flying away with the object dangling from the aircraft.