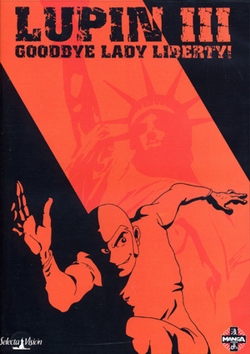 The very first in the Lupin III Yearly Specials, a series of Made For TV Movies produced by TMS Entertainment and Nippon Television. Bye-Bye Liberty Crisisnote  Japanese title: バイバイ·リバティー危機一発！ (Bye Bye Liberty Kiki Ippatsu!) first aired in Japan on April 1st, 1989. It was directed by the legendary Osamu Dezaki, who would go on to direct four more of the Lupin specials, making him the director to have headed the most of them. Yasuo Yamada, Kiyoshi Kobayashi, Eiko Masuyama, Makio Inoue and Goro Naya were lured back to reprise their roles after being replaced for The Fuma Conspiracy.

The special was dubbed into English and released in the United Kingdom by Manga Entertainment in 1996 under the title Goodbye Lady Liberty. It was, for many years, one of the only bits of the Lupin III franchise that saw release in the UK, but not the US. Thankfully, Discotek Media (ever the champions of Lupin) announced that they would give the special a DVD release in the US, including its rare English dub, under the title Bye Bye Lady Liberty. For a long time, this was also the only Lupin special outside of Funimation's block to have an English dub, until Discotek Media announced that they would make dub of Lupin III: Blood Seal ~Eternal Mermaid~ in 2018.

Lupin has decided to give up his life of crime when he finds out that New Scotland Yard's new supercomputer can predict his every move. Still, Jigen comes with a proposition for one last job, which involves stealing a large diamond called the Super Egg from the Statue of Liberty. However, when they are later joined by the young computer whiz-kid Michael and the lovely lady Isabelle, who hides a lot more than she lets on, and an evil organization called the Three Masons is hot on their trail, they start learning of a terrible secret that might cause The End of the World as We Know It.

Followed by Lupin III: Mystery of the Hemingway Papers.

Complete spoilers below – don't read further if you don't want to know how this caper turns out!

This TV Movie provides examples of: