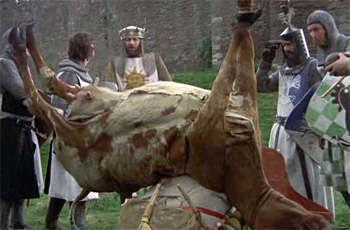 Originally coined by Monty Python, on the subject of sketch comedy — if a scene is starting to go on too long, drop a cow on somebody. Used to mean any point where, if the comedy dialogue is wearing thin, you skip to silliness. Can also use explosions.

This usually works because of the Rule of Funny. If humour isn't your thing, see Chandler's Law for the Rule of Drama version.

Note that this trope is not Exactly What It Says on the Tin — that is to say, just because someone gets a cow dropped on them doesn't mean it's Drop the Cow. You don't have to drop a farm animal for it to be Drop the Cow, either.

If instead of a cow, you want to drop a Dead Horse, you might use a Vaudeville Hook. For lousy Game Show contestants, you might want to Eject the Loser.

Not related to Dropped a Bridge on Him — using that to end a comedic scene would cause serious Mood Whiplash.

For the less zany versions of punctuation via vertical impact, see Flower-Pot Drop and Anvil on Head (which incorporates items like the 16-ton weight). For the anime equivalent of these, see Drop the Washtub.