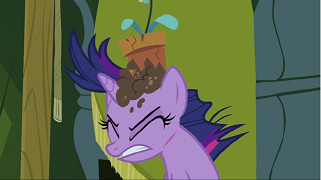 A character is taking a nice stroll, when suddenly a flowerpot falls out of a high window or Hammerspace and crashes onto their head.

This is a Zany Cartoon trope used as a less extreme version of Anvil on Head. Compare Piano Drop, and Drop the Washtub, a Japanese cultural variant.

Why a potted plant makes for terrible Mobile Shrubbery.

Why a potted plant makes for terrible Mobile Shrubbery.