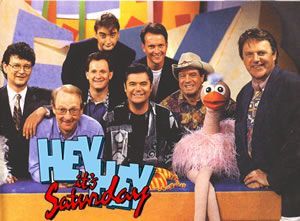 LIVE! From the Studios of Channel Nine, entertainment capital of the universe and on relay across Australia, including Melbourne, Sydney, Seymour, Canberra, Hobart, Adelaide, Perth, Darwin, Papua New Guinea, and Brisbane, Welcome back to another dose of what's good for ya!, with Dags, the Dick, the Duck, and the rest of our motley crew, it's "Hey Hey It's Saturday!" And now, here's the star of the show, Daryl Somers!!

This classic Australian Variety Show ran originally from 1971 to 1999, returning with a reunion special in 2009, and one final proper series in 2010. "Hey Hey" was originally a Saturday Morning Kids’ Show hosted by Daryl Sommers and Ernie Caroll (who played the puppet Ossie Q. Ostrich), the show eventually evolved into a (mostly) grown-ups' free-for-all that is still fondly remembered by many Aussies to this very day. On the other hand, its most recent incarnation was marred by ignominy thanks to a black-face skit during the Red Faces talent segment that few found funny, and which caused a backlash in the international media.

"Hey Hey It's Saturday" features examples of the following tropes.