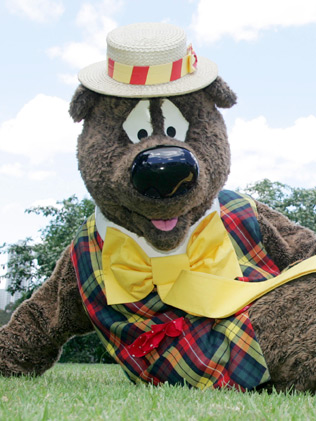 Humphrey B. Bear (originally called "Bear Bear" until an on-air competition resulted in his renaming) is a honey-loving and sometimes very clumsy star of the long-running Australian series Here's Humphrey, which debuted on Adelaide's NWS-9 station in 1965 before being picked up by its interstate counterparts a little while later. Humphrey has been an influence on other popular Australian programmes such as Fat Cat & Friends and the original Bananas in Pyjamas due to the appeal of the suitmation concept. Moreover, Humphrey has won many awards and commendations including a "Citizen of the Year" award at the Australia Day celebrations in 1994.

Humphrey was initially an expy of Fredd Bear, star of Fredd Bear's Breakfast A-Go-Go (1964) and the ever popular Network Ten programme The Magic Circle Club (1965), but soon Humphrey gained unique characteristics such as a straw boater, tartan waist-coat and over-sized yellow bowtie. The show was well-loved by generations of Australian children and spawned much merchandising, including dolls, lunchboxes and later VHS tapes and DVDs.

However, even an insitution such as Here's Humphrey was not immune to backlash. Predating the Teletubbies' similar criticisms by about 20 years, many "experts" and parents feared the fact that Humphrey was a mute would have a harmful effect on their children in developing their communication skills. Humphrey, like his one-time rival Fat Cat, has also come under fire for not wearing any pants. Needless to say, criticism of this convention was not taken as seriously as the former. Today however, most of the criticism are not targeted at Humphrey himself, but at his co-hosts, specifically for talking down to the viewers.

The series went into hiatus in 2003 (the next few years' worth of programming was entirely sustained by reruns), but in 2007 Banksia Productions and the Nine Network recorded a new season's worth of shows to be transmitted that year. However, the series went into hiatus yet again the next year after it was found that Banksia Productions had not paid off all its debts. Humphrey was finally rescued once again by media tycoon Shane Yeend in February 2012, who bought the rights to Humphrey and is now planning a comeback.

In no relation to Disney's Humphrey The Bear.