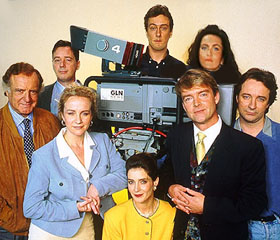 Gus Hedges: There is just something I'd like to pop into your percolator, see if it comes out brown.

Gus Hedges: Yes, well, publicity-wise, this is a rather regrettable gonads-in-the-guillotine situation.
Advertisement:

Drop the Dead Donkey was a 1990s British TV comedy by Andy Hamilton and Guy Jenkin, set in the newsroom of Globelink news, recently acquired by megalomaniacal billionaire Sir Royston Merchant. Aside from attacking politicians across the political spectrum, the show centred on the war of egos between newsreaders, the inability of editors to avoid the tabloidisation of their programme and the wickedly black banter and office terrorism between the rest of the staff.

Much like South Park, the show was produced close enough to its airtime that constant Take Thats were made to weekly issues. Possibly the most cynical look at a newsroom ever—and that's with some stiff competition.

Because of the show's topicality, new introductions were added for reruns and DVD releases summarising each episode's historical context.

In case you were wondering, the title refers to a filler article that's been lined up to pad out the bulletin falling foul of a real story breaking.