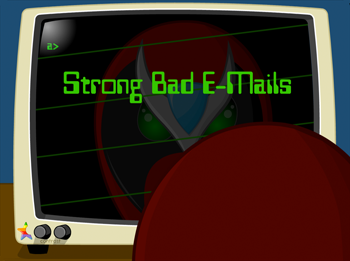 This episode, Strong Bad checks his email.
Keep sending me your questions, and I will keep making fun of your punctuation and spelling... I mean, answer them.
— Strong Bad
Advertisement:

Strong Bad Email — also known as sbemail — is a subseries of Homestar Runner. The series started in 2001, and has been known to suffer hiatuses

, the longest being the one from October 2009 to April Fools' Day 2015, and even that wasn't a true sbmail video as much as a transition between computers and a regular April Fools Toon. The hiatus would finally be broken for real in August 2017.

The series consists of Strong Bad responding to viewers' questions and suggestions, such as "Why don't you creat a montage?

", "What would you do different, if you could do it all over again?

", and the ever-popular "How do you type with boxing gloves on?

" This usually involves mocking the sender's spelling and grammar mistakes (in fact, the character of Homsar was actually created this way

), and quite often not actually answering the question.

The series is also responsible for the creation of yet more spin-offs/subseries on the website, including Teen Girl Squad, the Stinkoman franchise, Cheat Commandos, and anything involving the ever-popular beefy-armed dragon Trogdor the Burninator.

Dear Strong Bad, how do you trope with boxing gloves on?