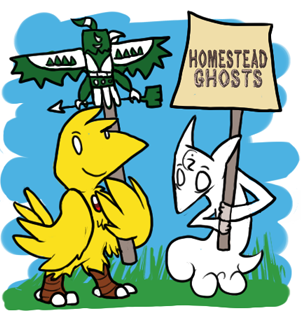 The main characters, Asiago and Iota

Homestead Ghosts is an imaginary animated TV show made by Strontium-Chloride on deviantART. The first episode can be read here

It's about the adventures of Asiago, a Hellmouth who looks oddly like a canary despite his intimidating title, and Iota, who was a hound damned to Hell by his brothers, at a summer camp called Camp Thunderbird. The camp is a normal camp for girls on the surface, but beneath that it's also a camp for ghosts made by the Thunderbird, a being of great power who decided he wanted to be a Lawn Chair. Why is a mystery. The other ghosts at the camp are Pater (a green horse-looking thing with claws), Radish (a pretty generic looking orange and white ghost), C (a ghost wearing what appears to be a gray sweater with incredibly over-sized hands), Atenta (an orange ghost that sort of resembles Velma), Mayfile (is a spirit/ghost that resembles an anthropomorphic bug), Kisher (a heavy weight ghost who claims to be the ghost of a bear), Coal (a shifty looking poltergeist), and DuWu (a mysterious bird-like ghost who adds duwu to the end of everything he says).

The story has recently begun its second season. Most of the story focuses on various activities and unusual events that happen at the camp. Ranging from passing a swimming test to exploring a land of ice and snow in the camp's freezer (aptly named Freezer Land). It has some darker elements as well, including finding out how all of the other ghosts died and Iota's past.This page is still under construction in terms of Tropes listed.

This "show" provides examples of: