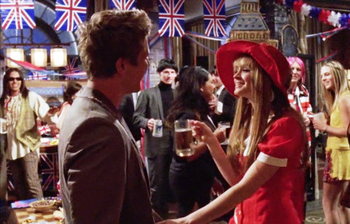 'Ello gov'na! Chips? A beer with Ringo? A loyal toast! The Queen!
Advertisement:

For a themed party, several things are needed: dress code or costumes, fitting decor and props, fitting music and guests willing to dress up. And obviously, the theme.

Good old classics are Wild West parties; tropical Hawaiian parties for casual occasions or for summertime; there are Hollywood glamour parties or classic black-and-white parties for something more formal, or under-the-sea themed parties or wanderlust themed parties for avid adventurers and travellers. Young kids might want superhero parties and little girls usually appreciate princess or unicorn parties. Popular themes are favourite books, films and shows du jour (for example, Harry Potter or Game of Thrones and other fantasy often pop up in The New '10s). It's often done for movie nights where the hosts and guests wear matching costumes while watching their favourite movies or shows (often a season premiere or finale). In fictionland, it often serves as a tribute and Shout-Out to creators' favourite fiction, countries and their cultures or various historical periods.

Themed parties take more effort than regular parties, but as everyone is willing to go the extra mile, it's supposed that it'll also be more fun. And it's a big win for the hosts: their party will be way more exciting and more memorable than any other party. The hostess will be the society queen for a really long time. Alternatively, it's often the loving parents who are willing to make their kid's birthday party extra special, making their child one of the most popular kids around. Such a party is usually treated as a Serious Business by the hosts. The guests are likely to appreciate it, but it can be seen as an extra thing to worry about and in the end, the extra effort might not even be worth it. Usually it's a party for many people, but a more intimate version for couples or small families is also fairly common. It's usually done to show that the characters who throw such a party (or show up at one) are fun, fun-loving, playful and creative. Party poopers complain about those parties, refuse to wear a costume or they don't show up at all. If a regular party is going badly, a last-minute change to a themed party can be done as a saving throw.

Characters are supposed to wear Coordinated Clothes to show that they belong to one social group who attend the very same party. It's a Costume Party, I Swear! is a related prank trope: One character is lead to believe they're invited to a costume party with a theme, but in fact, it's a regular party and they end up humiliated.

It appears often for school dances and proms, and it can also pop up in Birthday Episodes or Holiday Episodes. For example, Halloween parties in Halloween Episodes can be done with a theme.

An important note: All Halloween costume parties, holiday parties, bachelor/bachelorette parties, baby showers or even birthday parties are technically parties with a theme, however, this list collects examples that go a step above and have a specific motif chosen for the party.

To help Molly feel less ashamed about her period, Paige throws her a period-themed party with red balloons, red and period-themed food and drinks, and a uterus pinata. Enrique wears period clothing at the party because he misunderstood the theme.

To help Molly feel less ashamed about her period, Paige throws her a period-themed party with red balloons, red and period-themed food and drinks, and a uterus pinata. Enrique wears period clothing at the party because he misunderstood the theme.