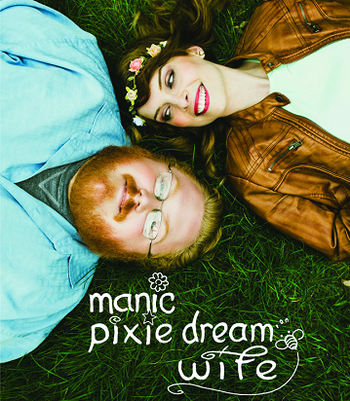 Have you ever wondered what happens to guys who actually marry a Manic Pixie Dream Girl?

Chance is a software programmer who married spontaneously for love. He loves his wife, but she wants to self-actualize him all the time and now Chance strives for a simple marriage and simple life. Simone is a quirky free spirit who is determined to turn Chance's life upside down. He seeks advice on the internet.

As his story unfolds, viewers get a chance to see things from a new perspective: the manic pixie's. Questions of how they define themselves arise, and it becomes clear that each is playing a number of roles. Other fairly prominent characters in the story are Chance's cool and friendly boss Serenity and Serenity's brother Vincent.

The first season from 2015 has 9 episodes. There are plans to develop the story further. This web video series is available on YouTube at manicpixiedreamwife channel

. It was written and directed by M. Elizabeth Eller. Simone is played by Amy Danneker and Chance is portrayed by Cody Smith.

Example of:
Mixtape of Love