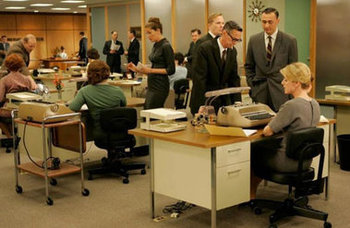 Describe the Standard Office Setting on Line 5 of the TP-1090 form.

This is a white-collar workplace, with cubicles and fluorescent lighting that never turns off. Most of the members of upper-management have their own offices, which may or may not be luxuriously furnished. The main room will most likely have a bullpen style setup to make it easier for characters to interact with one another. Everyone is either busy or non-existent. There are piles of papers on every desk and though people should be working, this is a work of fiction. Obviously nobody is doing exactly what they should be doing.

This could be a law firm, publishing firm, newspaper agency, advertising agency, or architectural company. This could even be a politician's campaign office. In fact, the specific type of business doesn't always matter and may not even be known. It just needs to clearly be white-collar.

Most of the characters here are White Collar Workers, though somebody's secretary is either the Sexy Secretary or Sassy Secretary. There may be a Plucky Office Girl and a Bunny-Ears Lawyer or two.

When there's an Office Romance, it's usually a case of Will They or Won't They?. If anyone is in danger of being terminated, it's never our main cast. Firings are usually equivalent to dying or being Put on a Bus, and if a character isn't fired but needs to be put out of the way, they get Kicked Upstairs.

Especially if this is a Work Com, expect Swivel-Chair Antics to ensue at some point and someone to use the photocopier in ways they shouldn't. They are likely to play Office Sports. If there's The Red Stapler, most people around the office will probably use the same one, and you'll probably end up buying one in Real Life because you keep seeing it in the work.

There are also works of fiction that portray the office life in a more serious light (expect to find this portrayal of the setting in Law Procedural, Police Procedural and other Crime and Punishment Series). It might focus on carefully navigating the office politics and pulling the right strings among your colleagues, subordinates and superiors. Some characters might strive to be promoted, they might want to form a new department or lead their own team, or if they are wealthy, they might want to become a partner and share full responsibility for the company. If your character is stellar at what they do, they might be headhunted by another company.

The Industrial Revolution led to an increase in the number of workers that businesses needed to handle paperwork, making this Older Than Radio, but it was The 20th Century's mass production and assembly lines which caused an explosion of white-collar work and made this the dominant workplace setting. The concept of cubicles were created in The '60s to increase productivity and save space.

Compare/contrast with Adminisphere, a setting workplace trope that portrays higher-ups and white-collars as having everything nice and fancy and so much better than ordinary workers of the same company. Soul-Crushing Desk Job is a common subtrope. A Desk Jockey is when someone works at a desk despite having an action related job like a police officer or soldier. Hospital Paradiso offers an even sleeker-looking workplace than is Standard Office Setting. The recent antithesis to this is the Wacky Startup Workplace, a fun, amenity-filled office offered by younger and/or hipper companies.