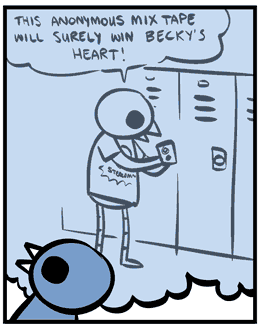 Reginald regrets the follies of youth
Sometimes when someone has a crush on you
They'll make you a mixtape to give you a clue
— "Mixtape", Avenue Q
Advertisement:

Mixtapes are a way to show your affection for someone. Fill them up with Silly Love Songs, give them to the one you like, and see how they react. They can also be shared between couples. In more gloomy occasions, someone can fill a mixtape full of sad songs and listen to it while silently pining after another.

While less common, mixtapes can also be given for similar reasons between friends and family.

Mixtapes are traditionally audio or video cassettes, however, due to Technology Marches On this has been expanded to CDs and digital playlists. You're still more likely to see them in cassette format, though. Having a physical sign of the romance can be more appealing. Cassettes also have more of a nostalgia factor than a CD, and are considered by some to be more aesthetically pleasing (not to mention that it's easier to re-record a mixtape on a cassette compared to a CD-R, in which you need to burn a new blank disc entirelynote rewriteable "CD-RW" CDs do exist, but are prone to accidental erasure and have a much lower range of compatibility than conventional CD-Rs).

Can overlap or include a Gift of Song.