All spoilers pertaining to the game's First-Episode Twist are unmarked. You Have Been Warned. 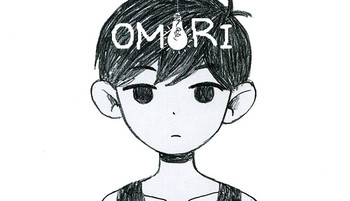 Welcome to White Space. note You have been living here for as long as you can remember.

Don't worry... Everything is going to be okay...

is an adventure psychological/surreal horror RPG from artist Omocat, based off of her comic of the same name. It tells the story of a young hikikomori named Omori, as he goes about his daily life living in an enormous white expanse, called White Space. A depressed individual, he rarely gets out of bed, and when he does, it's only to go on the internet or to grab a tissue to dry his tears. His eccentric and fun-loving neighbors, on the other hand, rarely sleep, and their technicolor dreamworld repulses Omori… though he admits to liking them, somewhat. One day, he finally works up the courage to try to experience their way of life. He meets the plucky Aubrey, the brotherly Hero, the mischievous Kel, the sisterly Mari, and the adorable Basil. Together they go on adventures and have fun in the strange, colorful realm of Headspace.

But one day, Basil goes missing, and it is up to Omori and friends to find him. As Omori continues on through the vibrant and the mundane, searching for his friend, he begins to uncover a forgotten past, as well as confront his deep-seated fears, the darkest secrets of his subconscious, and a mysterious shadowy Eldritch Abomination known only as Something, the culprit behind Basil's disappearance. When the time comes, the path chosen will determine his fate… and perhaps the fate of others as well.

Developed and launched on Kickstarter, Omori takes heavy references from other RPGs, most notably EarthBound. It was fully funded with several of its stretch goals met, including a full Japanese localization. The game was released on December 25, 2020 for PC systems, with Nintendo Switch, PlayStation 4 and Xbox One versions released on June 17, 2022 with additional new content. Music by Space Boyfriend

You can buy the game on Steam here

open/close all folders
Tropes # to G
Tropes H to Y
Waiting for something to happen?