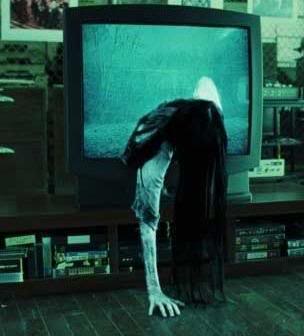 Well, at least it's not a Wii Remote.
You're watching television when suddenly the screen turns to static. A face appears, dark and scary, but you're not worried. After all, it's only the television, nothing can happen. But then it moves closer and closer, so close that it starts reaching out from the TV screen. Now you're very, very scared.
Advertisement:

Welcome to the Television Portal. Most often a form of Nightmare Fuel ('cause who wouldn't be freaked out by a television image coming to life?) and Paranoia Fuel (do you know how many hours of television you watch?). Sometimes results in Up the Real Rabbit Hole, Trapped in TV Land, Refugee from TV Land. May start when The Television Talks Back. A subtype and quite literal version of The Fourth Wall Will Not Protect You.

May extend to coming out or going into a television set or other electronic device with a screen (i.e. a computer). Also very commonly done with a Stringy-Haired Ghost Girl as a Stock Shout-Out to The Ring.

Compare Reaching Between the Lines (the same effect, but used as comedy) and Portal Book (the low-tech version, less likely to be played for horror).

thank you for watching :-)

The 3D creature bursts out of the TV to thank the audience for watching, much to the Smiling Friends' horror.

Example of:
Thanking the Viewer

thank you for watching :-)

The 3D creature bursts out of the TV to thank the audience for watching, much to the Smiling Friends' horror.