Reaching Between the Lines 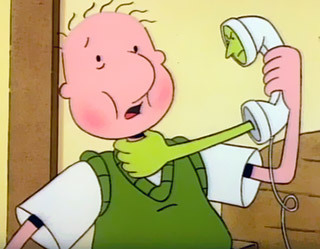 Wow. Telemarketers get more aggressive every day.
"A pay phone was ringing
It just about blew my mind
When I picked it up and said hello
This foot came through the line."
— Bob Dylan, "Bob Dylan's 115th Dream" - Bringing It All Back Home.
Advertisement:

In television, phones are surprisingly convenient, but in cartoons, they can be even more so. They don't just connect two people metaphorically, they act as mini-teleporters between two places. Occasionally small objects can pass through, but just as often people put parts of their body through the phone line and make contact with the people on the other end (often to deliver some violence), or the phone take on properties of the event (such as growing a mouth).

As an example, if Dave has overslept for work, he might expect a phone call from his boss via a telephone which develops an enormous mouth and yells at him to wake up. It might then develop a giant eye to see that he's still in bed before the boss's upper torso appears from the line and shakes him awake. A grumpy Dave might then reach back through his phone and whack his boss, forcing the boss to pass his job notice form through the receiver.

How this works is never once considered. After all, if sound can be teleported over to the other receiver in an instant, why not other things?

This mostly seems confined to cartoons, although similar events have shown up in live action comedies from time to time, usually ones that don't confine themselves too closely to the laws of reality. Unless of course it's those scenes in particular that are not real. While there are more serious works where phones are used as transport focuses, this is about humourous uses.

Compare Telephone Teleport (in which the character physically travels to the other end of the phone line rather than merely reaching out through it) and Television Portal (in which a video link is used in a similar manner). A Smell Phone works on the same principle.