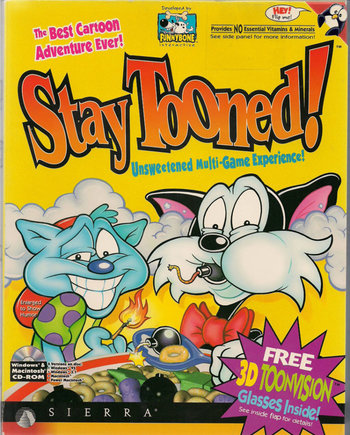 Stay Tooned is a 1996 video game developed by Funnybone Interactive and published by Sierra.

One night while you're channel surfing, an eclectic collection of cartoon characters escape from your TV thanks to your remote, which they promptly take from you. It is your goal to collect the keys needed enter the other rooms of the apartment complex you live in in search of the remote, which is the only thing that can send the toons back to Toonland.

It is notable for being a particularly random video game, with many, many cutscenes.

Not to be confused with Stay Tuned, which is about more or less the opposite problem.