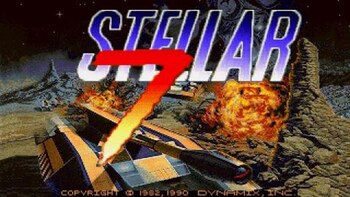 Gir Draxon, Supreme Overlord of the evil Arcturan Empire, is preparing to launch an attack on Earth. As Commander of Terran forces assigned to protect the planet, your mission is to reach the Arcturan star system and destroy Draxon before he can assemble his forces and capture Earth.

To help combat the powerful Arcturan Armada, Terran High Command has placed you at the controls of the Raven, Earth's most sophisticated fighting machine. From the command seat of the Raven, you must face Arcturan forces in seven different star systems. If you successfully destroy enough of the enemy forces in one star system, a Guardian will appear. If the Guardian is battled and defeated, a Warp Link will appear. Drive into the Warp Link to transport yourself into the next star system. Upon reaching the seventh system, Arcturus, you must locate and destroy Gir Draxon's flagship. Should you succeed, Earth will be saved. Failure will leave your home planet defenseless against Draxon's assault and guarantee Earth's destruction!

Stellar 7, whose title is based on the seven planets the player must battle on, is an action-style tank simulation video game based on the arcade game Battlezone, in which the player assumes the role of a futuristic tank pilot. The game was originally created by Damon Slye for the Apple ][ and Commodore 64 in 1983.