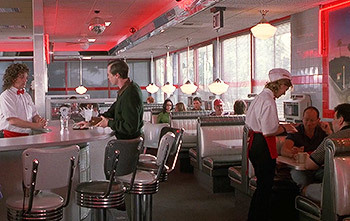 Brian (manager of The Greasy Fork): Britta, you promised that this private party would be done by eight. You're doing this during the peak business hours for nostalgia-themed diners.
Annie: Oh, is that true? Has that been researched?
Brian: It has, Annie. After they get frightened by the evening news, many seek the comforting foods and soothing music of a pre-racial America.
— Community
Advertisement:

Obligatory bit of 1950s Popular History. All the kids hang out here, play Pinball, and listen to the jukebox play Nothing but Hits. Carhops are optional. The Malt Shop may also be referred to as a diner, a soda fountain, a drug store or a café but the general look is always basically the same. In a Time Travel story ending up in The '50s, often the first place gone into after the "Mister Sandman" Sequence (as in Back to the Future, for example).

There is some historical basis to these places; during most of the early-post-war era, from the mid-1940s to the 1950s, very few modern "chain" fast-food places were in business yet and the infrastructure to support them was still being built. As a result, there were a lot of privately-owned, short-order diner-style restaurants that served things like burgers and non-alcoholic malted beverages. Not all of them were hopping, hip places where the kids hung out, but pick a major suburb and you could probably find at least one. Many of the most successful ones would go on to become the major chains of The '70s and The '80s, driving their smaller competitors out of business.

The Greasy Spoon is the Malt Shop's less romanticized (but equally conventionalized) cousin. Watch out for the teenagers who are Sweetheart Sipping or the possible eruption of a Diner Brawl. In Australia and New Zealand, and in Great Britain in The '50s, these places were traditionally known as 'milk bars'.