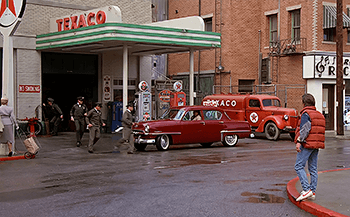 "Let's take a look back at the year 1928. The year when you might have seen Al Capone dancing the Charleston on top of a flagpole."
— Kent Brockman, The Simpsons
Advertisement:

A scene in a Period Piece that hits the viewer with as many period signifiers as possible. The scene exists to quickly establish the "feel" of the time period and will almost always feature a period song (typically one that is still popular in the present) playing on the film's soundtrack. More-or-less it's Popular History condensed into a sequence usually less than two minutes long.

These are most commonly and generally best utilized by films and TV shows about Time Travel (especially when the characters frequently travel between different eras, making quickly establishing the time period a necessity).

Compare Spinning Paper and Eiffel Tower Effect. When a scene in a work set in the present day becomes this in hindsight, then you've got an Unintentional Period Piece. See also Progressive Era Montage. Has nothing to do with the Metallica song.

After traveling back in time, Marty McFly enters the 1955 version of Hill Valley.

After traveling back in time, Marty McFly enters the 1955 version of Hill Valley.