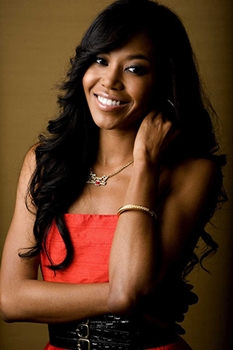 Amerie Mi Marie Rogers (born January 12, 1980) is an American R&B music artist as well as model and occasional actress. She debuted in 2002 with her sleeper hit single "Why Don't We Fall in Love" and the subsequent album All I Have. In 2004, she acted alongside Katie Holmes in the film First Daughter and released her follow up album Touch in 2005, which included the single "1 Thing", her biggest hit to date. 2007 saw her experimenting with 80s-inspired new wave and pop with her album ''Because I Love It'', which included the international singles "Take Control" and "Gotta Work". In 2009, she released her fourth album In Love and War, in which she incorporated 90s-inspired R&B and hip-hop, and elements of soft rock. She plans on releasing her fifth album Cymatika Vol. 1 in the future, where she will explore acid house, trance, new wave, and electronica. This album will include the yet-to-be-released single "Outside Your Body".

Her music is known for including go-go beats, percussion, gorgeous harmonies and aggressive vocals. Her albums have generally been well-received by critics.

She has collaborated or have had her songs remixed by several rappers, including but not limited to: Nas, Ludacris, Royce da 5'9, Fabulous and Jay-Z. She also collaborated with Asian pop artists such as Se7en and 4 Minutes, and has expressed interest in working with K-pop artists again in the future.