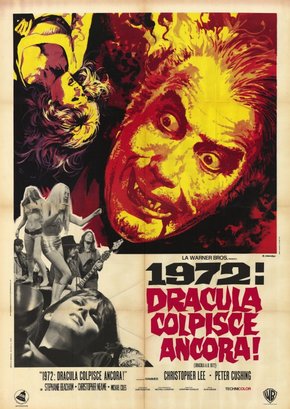 Witness the true horror of the film: The '70s!
Advertisement:

Dracula A.D. 1972 is a horror film from Hammer, and is third-to-last in their Dracula series.

The film opens with Dracula (Christopher Lee) and Van Helsing (Peter Cushing) fighting in 1872, which ends with both of them dead. One of Dracula's servants scoops up Count's ashes and buries them near a church during his rival's funeral. 100 years later Johnny Alucard (Christopher Neame), a descendant of that servant, convinces a bunch of youths to stage a satanic ritual. This resurrects Dracula, who then starts preying on the modern times. Van Helsing's grandson (also Peter Cushing) is still carrying on the family Dracula-fighting business. Modern-day Van Helsing's granddaughter Jessica (Stephanie Beacham), unfortunately, is one of the youths at that satanic ritual.

The seventies setting is revisited in the sequel The Satanic Rites of Dracula, which would be the last film to feature Christopher Lee as Count Dracula.

Examples in the film: