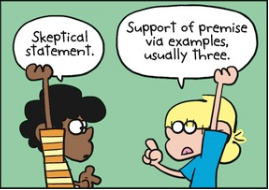 Definition of the trope, explaining that the trope occurs when specific lines of dialogue are replaced by general and generic descriptions, giving the appearance of a template.

Explanation that the trope is often used in parody and Deconstruction to highlight patterns and clichés.

of Trope Name. References to other, relevant tropes. Justification of reason trope was split from older, less well-written trope.

Mild warning that this trope is not to be confused with similarly-named non-trope page or similarly-titled and easily confused page.

A list of things that demonstrate the use of this trope: