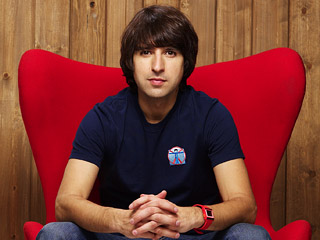 Demetri Evan Martin (born May 25, 1973 in New York City, New York) is an American Post Modern stand-up comedian, director, actor, artist, musician, and writer. His comedy features a blend of jokes, illustrations, animation, and music. He previously appeared on a recurring segment of The Daily Show with Jon Stewart called "Trendspotting," which lampooned youth culture. He starred in his own Comedy Central series, Important Things with Demetri Martin, and has a starring role in Ang Lee's film Taking Woodstock and voiced Ice Bear in Cartoon Network's We Bare Bears.

His work features examples of: