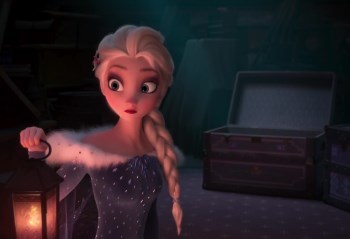 Someone looking around a dark room + open trunk also in frame = upcoming Jump Scare.
"It's rare for Game of Thrones to have such a heartwarming, uplifting scene. That girl is so fucked."
— Dave The Direman

on Game of Thrones
Advertisement:

This is when Chekhov's Gun has been fired enough to make it predictable to long-time viewers. Basically something will happen in a show, and a viewer knows what is going to happen next.

Let's say some woman buys a new dress. If it's fancy enough, and she gushes over it, that dress is getting wrecked. Or say a guy has a fear of flying even if that is never shown before. Odds are he is going to get over it by the end (except when you're being ironic in the Alanis Morissette sense).

This is common in Strictly Formula fiction, but it doesn't necessarily hurt the story.

Note this is strictly when the clue is In-Universe. If the clue is meta to the story, it's another trope.

Ways this trope 'can count'' include if the characters are aware of what is going to happen, that is Lampshade Hanging due to Genre Savvy.

You can also know when a proper example of a Subverted Trope happens, when something is telegraphed, but doesn't happen.

A Super-Trope to Tempting Fate (characters saying something that dares the universe into making things miserable for them, with the universe happily complying), Too Happy to Live (the extreme happiness makes it clear that tragedy is about to strike).

Finally, examples shouldn't be specific, so much as be just about the clue, and what is going to happen next.