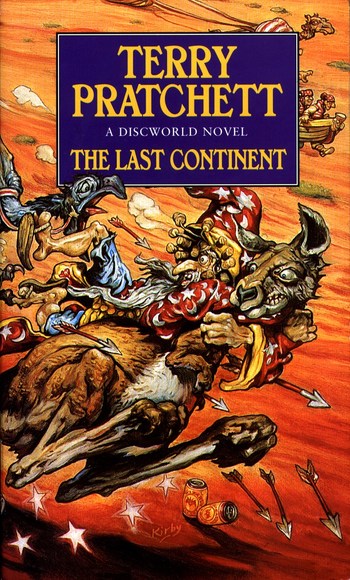 This is the Discworld's last continent, a completely separate creation. It's hot. It's dry... very dry. There was this thing once called The Wet, which no one now believes in. Practically everything that's not poisonous is venomous. But it's the best bloody place in the world, all right? And it'll die in a few days. Except... Who is this hero striding across the red desert? Champion sheep shearer, horse rider, road warrior, beer drinker, bush ranger and someone who'll even eat a Meat Pie Floater when he's sober? A man in a hat, whose Luggage follows him on little legs, who's about to change history by preventing a swagman stealing a jumbuck by a billabong? Yes... all this place has between itself and wind-blown doom is Rincewind, the inept wizard who can't even spell wizard. He's the only hero left. Still... no worries, eh?
Advertisement:

The 22nd Discworld novel and the sixth in the Rincewind theme. Was written at the same time as The Science of Discworld and there is some obvious relationship, such as the mention of Slood and the Shoemaker-Levy 9 comet.

At Unseen University, the wizards are concerned as the Librarian has contracted a form of magical flu which interferes with his morphic field, turning him into random beings and objects every time he sneezes. In order to cure him of these transformations, they need to know his real name, but he refuses to tell them as he's afraid someone will use it to turn him back into a human. The wizards realize that beside the Librarian, only Rincewind (who was Assistant Librarian for a time) could potentially remember this name.

Unfortunately, the events of Interesting Times have left Rincewind stranded in the outback of Xxxx, the Last Continent, and he's still there, somehow surviving on the burning desert. This is because, as a Trickster posing as a kangaroo named Scrappy tells him, he's been kept for a purpose: he has to bring rain back to the arid continent. Rincewind immediately runs away, of course, but these quests have a way of sneaking up on you regardless.

Back in Ankh-Morpork, the wizards, looking for the Egregious Professor of Cruel and Unusual Geography to help them navigate to Xxxx, discover that he's missing and his office conceals a portal to a nice sunny island. They, and housekeeper Mrs Whitlow, all end up trapped there.

Will Rincewind bring back the rain? Will the wizards find their way back home? Will Ponder Stibbons discover the truth about evolution on the Discworld? And what's up with that weird kangaroo guy?

Preceded by Jingo, followed by Carpe Jugulum. Preceded in the Rincewind/Wizards series by Interesting Times, followed by Unseen Academicals (or The Science of Discworld, if you're including it).