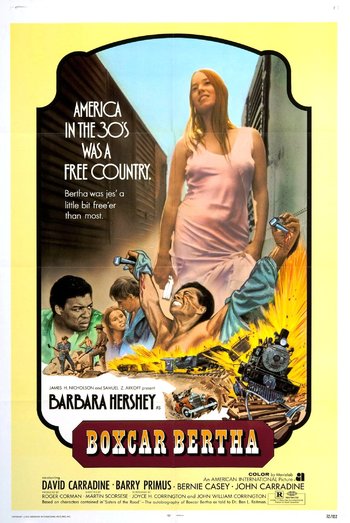 Boxcar Bertha is a 1972 crime drama produced by Roger Corman and directed by Martin Scorsese.

In Arkansas, during The Great Depression, Bertha Thompson (Barbara Hershey), just barely into adulthood, is forced to leave home after her father dies in a tragic accident. She meets Big Bill Shelly (David Carradine), a labor organizer who also rides the rails. They fall in love but have to part. In her wanderings, Bertha hooks up with Rake Brown (Barry Primus), a roving gambler and Con Man. When Bertha and Rake meet up with Bill by chance, the trio bands together with another drifter, Von Morton (Bernie Casey), to commit a string of train robberies, which Bill views as a political statement against capitalist corruption, but also provides them money at a time when few people had it. Once their crimes draw the attention of Railroad Baron Sartoris (John Carradine), Bertha is forced to go on the run again, and ends up working in The Oldest Profession. But she'll get one more chance to be with Bill.

Scorsese's second feature film, and his first for a Hollywood studio, a Bonnie and Clyde knockoff seems like a bit of Early Installment Weirdness for him. But he considers it an important moment in his career, since doing an exploitation film under the wing of Corman gave him a chance to perfect the filmmaking techniques he would later use on more personal films. It was also on the set of this film that Barbara Hershey introduced him to the Nikos Kazantzakis novel The Last Temptation of Christ.