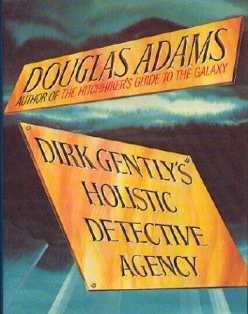 Without a doubt, the best time-traveling romantic detective ghost comedy ever written.
Advertisement:

Dirk Gently's Holistic Detective Agency is a 1987 novel by Douglas Adams, the first in the Dirk Gently series.

Dirk is a small-scale con artist whose latest scheme is working as a "Holistic Detective", who believes in the "fundamental interconnectedness of all things" and how that means that anything might prove useful in solving the whole cases of his clients — which, the way he sees it, means that he can do anything he likes, even take a three-week tropical vacation, and still charge it to the client as an expense. Of course, by Finagle's Law, somehow every mundane little job he starts off working on in each novel is somehow actually connected to the main plot, and he's the one who has to solve everything.

In this novel, while (supposedly) investigating the disappearance of an old woman's cat, Dirk stumbles into a plot by an extraterrestrial ghost to undo his death with a Time Machine. Too bad that would undo the creation of life on Earth! (It all Makes Sense In Context. Even the robot created to be religiously faithful in place of its creators.)

There is a second Dirk Gently novel, The Long Dark Tea-Time of the Soul and an unfinished third called The Salmon of Doubt.