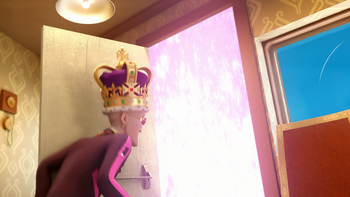 This is a door that opens to a location other than the one behind it; in time, space, and even outside of it! Its ability to connect two unrelated locations automatically qualifies it as a Cool Gate, even when the materials are of mundane make and manufacture.
Advertisement:

How can this door bend space and time like a Dali painting? It may be a technological teleportation device, a Time Machine (or both). It could also be made through magic (which usually justifies it being otherwise mundane looking), and may lead to the Magic Land, Spirit World or Dark World. Lastly, it may be some form of "naturally" occurring gateway of Eldritch origin that leads to an Another Dimension.

This is a supertrope to The Lonely Door, where the "doorway" isn't built into a wall (it still needs to be a standard-looking door, not just a portal in the air). This is a subtrope to Cool Gate, where you can find additional portals.