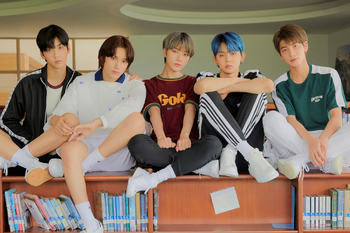 TOMORROW X TOGETHER (pronounced Tomorrow by Together) or TXT is a South-Korean boy-band that debuted under BigHit Entertainment on 4 March 2019, nearly 6 years after BTS, with the mini-album The Dream Chapter: Star. The group consists of five members: Soobin, Yeonjun, Beomgyu, Taehyun and Hueningkai.

TXT's style takes a more whimsical approach than both their label-mates and most Korean boy groups, fully embracing their youthfulness and incorporating fairy tale and fantasy elements into their work. This is seen both in their music - with references to things from orangeade to Harry Potter and a playful, nostalgic, and sometimes sentimental pop sound -, and their concept and music videos - which take a fairytale-esque way of storytelling. However, both their sound and music videos can sometimes take a surprisingly dark turn.

With the release of the "Nap of a Star" music video, TXT has started its own musical narrative universe, the TXT Universe or TU (stylized as +U) renamed the Star Seekers.

open/close all folders
Members
Note: Other than Soobin being the leader, none of the members have official positions within the group.
Music Videos
Advertisement: